With The Psychedelic Years, Palinckx gave birth to a mammoth album and achieved a level of complexity, craziness, and artistic perfection it would never be able to match again. In 74 minutes, guitarist/leader Jacques Palinckx boiled down the complete music history of the 1960s and 1970s, thanks to multiple quotations and a very personal sense of the bizarre. Nothing is sacred: soul, fusion jazz, surf, psychedelic rock, hard rock, space rock, TV themes (the omnipresence of Star Trek), beat poets, disco, etc. The whole thing feels like a journey into the mind of a forty-something person reminiscing about the music he/she used to listen to. Flashes of quotes appear here and there, sometimes clearly defined, at others only hinted at, all mixed together into an organic memory-recall process. The work is structured in 15 “phases,” each with a specific focus (which doesn’t prevent other quotes from polluting it, just like a person can never completely isolate one specific thought), except for the overture and the two finales. There is not enough room to detail all the tracks, but highlights include “Phase Two (STRNMBKDMNY),” the best cover version of Pink Floyd’s “Astronomy Domine” ever recorded, full of psychedelic free improvisation and interpolating “Bike”; “Phase Four (More Boots),” built on Lee Hazlewood’s classic song “These Boots Are Made for Walking”; “Phase Six (Zappa 2),” which blends the Mothers of Invention’s “Oh No” with “It Can’t Happen Here.” For this humongous project, the core of Palinckx (brothers Jacques and Bert Palinckx on guitars and bass, Cor Fuhler on keyboards, Jim Meneses on drums, and Joost Buis on trombone) was augmented by a female and a male singer (Han Buhrs would later become a full-time member of the band), and the Aquarius Ensemble, a chamber orchestra. For any fan of experimental rock, The Psychedelic Years is more than a must: It is the Rosetta stone of the Netherlands avant rock movement — and tons of fun too. 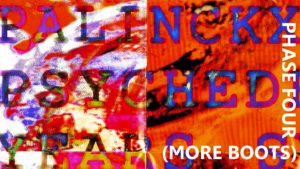 About the author jacq